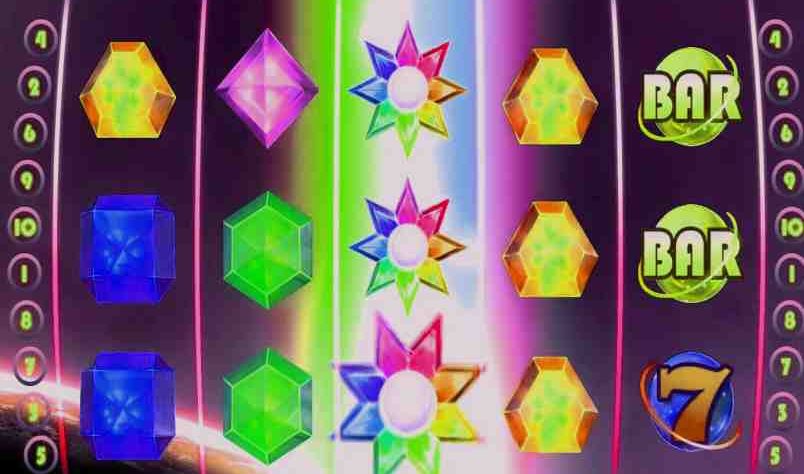 “Starburst” was highly appreciated by fans of slot machines immediately after its appearance. Some may find this strange, because “Starburst” is a fairly simple game without fancy extra features. It has no free spins or exciting bonus games. However, “Starburst” has managed to charm many people. And we have to admit that we are among them. So what is it about “Starburst” that makes the heart beat faster? At first glance, it seems that the usual 5 reels with 10 paylines can not be anything special. You might say it even sounds rather boring.

And yet what makes “Starburst” stand out from hundreds of other online slots? At this point it is worth mentioning that most modern slot machines draw attention due to their whimsical 3D animation. At the same time, classic slots usually rely on the use of simpler and more traditional images, like jokers or leprechauns.

You can’t say that “Starburst” boasts any extraordinary graphical effects, but it definitely has its own unique atmosphere. The game characters are colored gems that rotate on a velvet purple background. The interface “Starburst” pleases the eye with its delicate colors and takes you to the boundless and soothing outer space.

“Starburst” won’t open you up to America in terms of gameplay, although, as you’ll learn below, it’s hard to call it ordinary. Like many other video slots, “Starburst”, in addition to the ability to choose the value of coins, has a handy “Level” feature that allows you to adjust the number of bets on all 10 fixed lines. The most adventurous players can use the functions “Autoplay” and “Maximum Bet” and go on an exciting journey with minimal involvement on their part.

The standard version of the game

As mentioned above, the “Starburst” video slot has 5 reels with 10 paylines. Keep a close eye on the second, third and fourth reels. On them, “Wild” symbols in the form of a multicolored star can fall out and completely fill the entire reel. Stars emit rays of light if they replace the missing symbols and collect winning combinations. They also trigger re-spins, but no more than three in a row (a certain alternative to free spins).

This happens in the following way: if Wild symbols appear again during the re-spin, they remain on the playing field together with the already present stars, and you get another re-spin.

In addition, one of the most important elements of the game is a great feature “Win Both Ways” – winning combinations count from left to right as well as from right to left! This opens up new possibilities for you, because in fact, it means that Starburst actually has more than 10 paylines.

Playing on a mobile device

“Starburst” also looks great in the mobile version of the game. On your gadget, you can enjoy all the same nice graphics and music as in the standard version, but thanks to the handy touch technology of NetEnt Touch Game, you’ll get even more features!

Therefore, playing from a mobile device can be even more convenient, especially if you are not new to the world of online casinos. Of course, all the features of the standard game are also present in the mobile version.

We have to admit that it’s hard to add anything new to what has already been said above in this part of the review. “Starburst” boasts neither generous multipliers nor “Scatter” symbols, which may disappoint some players. Nevertheless, it is worth once again listing separately the features that have made “Starburst” one of the most popular video slots.

“Starburst Wilds” is a special feature that triggers repeat spins, but no more than three times in a row. The “Wild” symbols fill the entire reel and can create many winning combinations!

“Win Both Ways is perhaps the most interesting feature of Starburst. Winning on a betting line counts on the first three or more reels from left to right as well as from right to left! It’s these game features that greatly increase your chance of winning big and keep you coming back to “Starburst” over and over again.

What about the progressive jackpot?

There is no progressive jackpot in Starburst so there is a limit to how much you can win. But it is worth fighting for! Have you remembered the Starburst Wilds feature we talked about? Well, if you roll on three reels at once symbols “Wild”, you can count on a maximum win of 50,000 €! Is it any wonder that “Starburst” is so popular?

So, we already know that the maximum winnings can be 50,000 coins. However, let’s try to understand the symbols and other possible combinations in more detail. At the bottom of the payout table are purple, blue and orange stones. At a greater winnings should expect to fall on the playing field combinations of green and yellow gems. Carefully look for the red seven, because the line, which will be five of these characters, you will get 120 coins. But the best paying line of five gold “Bar” game symbols is 250 ringing coins.

Also, the “Starburst” video slot can offer a wide range of possible bets, from small amounts for cautious players to higher bets for those who like to play big. Choose which style is right for you and bet from €0.10 to €100.

Let’s be honest. Somehow NetEnt has managed to create a truly addictive game. Seriously! And its popularity speaks for itself. There is something in “Starburst” that is difficult to describe in words. After all, we all know that there are many colorful slot machines that can boast an unusual gameplay or a variety of bonus games. And many players prefer them.

And yet “Starburst” is a game you want to return to. Maybe it’s the cherished 50,000? Or the magical space atmosphere? Between you and me, it seems that people ultimately strive for things that are simple and straightforward. If you ask us: for the future of which video slot you can not fear, we will not hesitate to answer – “Starburst”. After all, this slot machine is already a legend.